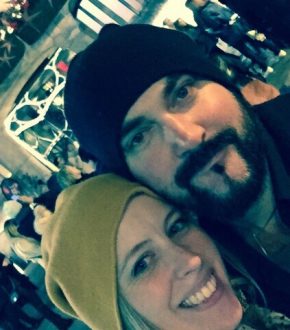 Skochy Prosperity Investment was the brainchild of me, Scott, and falls under the Skochy umbrella of companies. That’s me in the pic with the cutie, Jem, my much better half.

That’s us in Barcelona, getting near toward Christmas time. We lived there for 2 full months with a bunch of cool people, before living in Perth, Australia for 3 months with some awesome friends, enjoying Christmas on the beach in the hot sun.

We then travelled South East Asia, Indonesia at first, seeing Bali and Gili. And then it was off to Malaysia, staying in Kuala Lumpur, Melaka, and Singapore. And we’re still going. All thanks to mine and Jem’s mobile lifestyle.

How is this possible? That’s what this site is all about. But that’s not where the story started…

A Man Shows Up At My Door With A Video

I started off in network marketing (don’t worry, I don’t do it anymore), back in 2000, as my first exposure to business. I answered a shady lineage ad at the back of the paper. You know the ones: “Make a grand a week with cleaning products”. My first foray into network marketing was with a catalogue company called Kleeneze. 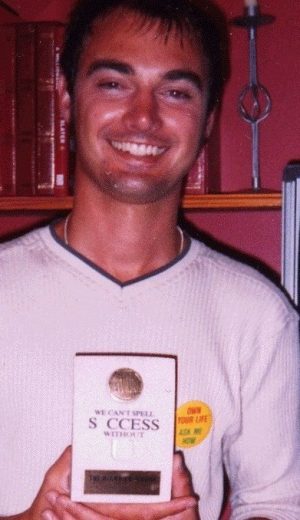 The man from the ad came to my door, put on a video showing lots of pretty people driving fast cars, sailing on boats, making lots of money.

And that was that. That was all the invitation I needed to try something new. Something different. It was like I’d seen through the looking glass at a life I once thought people were born into, but in actuality, was attainable for anyone that worked for it.

I was going into strangers’ houses and presenting business opportunities to them. I was building, and training teams. I was doing some public speaking. Won some awards.

I was doing things in my life I never thought I’d be doing. Things that other people did. Things that I believed were things people like that just did, because they could.

I was starting to really love life. Getting up in the morning with zest, and motivation. Making like-minded friends. Getting praise and feedback. The kind of feedback you want to hear, that pushes you forward. As opposed to the negative, soul-destroying, destructive feedback I’d received in school.

But the growth didn’t stop there. 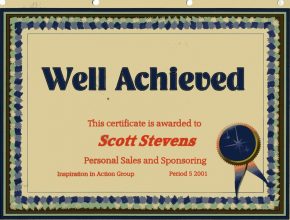 Our sponsor had a party at his millionaire mansion in Bristol, and everyone had to speak in front of the group and share their story. I told mine. And later he said to me, “When you spoke, everyone sat forward. If you made public speaking your career, you’ll become a millionaire”.

That was all the motivation I needed to keep on track of my dreams.

But I wanted more. I wanted my OWN company, my own products and services. And that’s when I then discovered Internet marketing in 2002.

And that changed everything for me.

A man called Paul – who bizarrely was one of three blokes who each drove a silver Porsche (mine was black) that at different points in my life I ended up going into business with – sent me an email with a link to a product called ‘Mining Gold On The Internet’ by Shawn Casey. I bought it, and then started my online marketing journey.

For the next few years, I began learning everything I could about selling and marketing on the Internet. I tried lots of things, and made some money.

Affiliate marketing. AdSense sites. Ebooks. Email marketing. AdWords (remember ‘Google Cash’ by Chris Carpenter? Wish I knew what he was up to now). Membership sites. I even created a membership site where I taught online users how to play the guitar…

But most of all, those few years leading up to today were somewhat of an apprenticeship for me.

And when I got myself a job in a jewellery shop to pay my way whilst building another business, the penny finally dropped. I realised that local, bricks-and-mortar businesses needed help getting customers from the Internet.

I realised that when they are busy running their businesses, they simply don’t have the time to learn how to use the Internet to get more sales, let alone actually make it happen.

And that’s a shame, because more and more, the Internet is becoming an important medium for getting new customers. Especially with the rise of mobile Internet, and social media.

So now I spend my time putting together joint ventures, getting local businesses customers from the Internet, training sales teams, and more recently, training other consultants to do the same, as well as offering success coaching to ambitious men.

If you asked me what my mission in life was, I’d say, to leave my world better than I found it. Whilst having an amazing time.

So with that said, I hope someday that we get to work together.

Why ‘The Musical Salesman’? 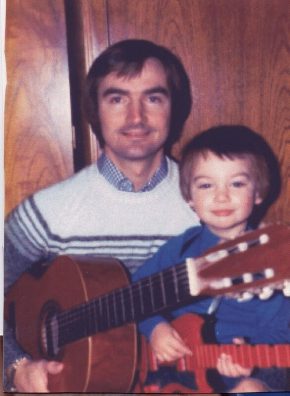 Guitar is my number one passion, and I’ve had a guitar in my hand since I was 5.

My Dad played, and I idolised him (still do). It started with a plastic, kids guitar (more to be like my Dad, I think, than anything else). And later, I used to sing along to records on the hifi system – vinyl records, that is.

When I was around 10, we had a NOW record with ‘Sweet Child Of Mine’, by Guns ‘n’ Roses (who I still love). I asked my Dad how the guitarist (Slash) got that weird sound in the guitar solo. He told me it was a ‘wah wah’ pedal.

And that was it. “I want to learn the guitar properly now, Dad”.

He setup two guitars in the dining room one night. And he showed me how to play the guitar, using Bert Weedon’s ‘Play In A Day’. And the rest is history.

I never became a rockstar, so here I am doing joint ventures and consulting :-)

The ‘Salesman’ bit of ‘The Musical Salesman’ is simply that I consider ‘sales’ my profession.

Who Is This Site For?

This site is for ambitious men. That’s the intended audience, but really it’s for anyone looking to get ahead in life. I’ve just aimed it at that segment because, that’s my niche – ambitious men with a passion to achieve their dreams. Be it a business/service to sell, a career where you’re expected to sell, talent like acting/music/art/etc., or just selling yourself to get better relationships, and better women.

I had a few jobs in my time where I worked with just men, and experienced the whole brotherhood, and camaraderie that goes with working with a bunch of blokes, and I’ve always enjoyed that dynamic. I consider myself quite bloke-y in some ways. I wanted to build a community of like-minded guys that I could physically meet up with and have a few beers with around the world.

Plus, there’s lots of generic business/selling/self development/motivational sites out there, and tonnes of female-orientated ones, too (all of which is great!), but not really that many for men. So from a marketing, niched point of view, this is where I’ve chosen to peg myself.

Why The Blog Now?

I love writing, I love life, I think deeply, I’m basically just an ambitious, creative, fairly old-fashioned, but forward-thinking bloke, who wants to leave the world better than he found it. I intend to do good things in my time on this planet (see our charity page!), and this website and business help me in my cause.

And I love words. I was brought up with Monty Python, and the silliness and randomness with it. I love how a few words can be strung together to make people laugh or smile. My brother and I as kids, used to make up our own words. And I’ve never really stopped. I intend this site to be very much the written version of my own personality.

And my writing will most certainly be open, honest, and vulnerable. I missed out a lot of the bad stuff above, but I intend to touch on that in the blog, as we go. So I will go deep, and touch the parts other blogs fail to reach.

There will be the odd cuss here and there, and a constant theme of contrarian, anti-authority and politically-incorrect commentary on this here website. So if that’s not your thing, exercise your adult, skill to choose, and simply move along. I mean no harm. It’s all just banter and words, at the end of the day.

Where To Find Me